Now, this tutorial is mainly on how to add Nuffnang's Alternate Code in XML Blogger template without an error in relation to my previous post.

Inserting directly the default Nuffnang code would not result to an error. But if you use the alternate code, an error will appear. You still need to convert a few characters into html entities to make it work.

I said only few characters because you only have to change 2 characters repeated twice in the alternate code, the < and the >. Now here's the thing, you need to change "< to &lt;" and "> to &gt;" in the document.write syntax. 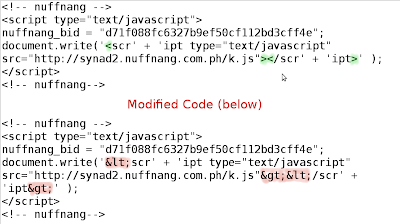 After modifying the code, you may now proceed with Step 3 of the my previous post.

I would recommend that you just use Nuffnang's default code to make it easier.